Year 2021 has been pretty eventful for Pakistan’s automotive industry. From a bunch of new cars as well as announcements of new cars, it is safe to say 2021 has been one of the most progressive years in the history of the Pakistani automotive sector.

The SUV invasion of Pakistan: How it started…how it’s going!

Here are some of the prominent things that happened last year.

Year 2021 brought us a handful of new cars as well as the announcement of new cars for 2022. Let’s start with the new launched vehicles.

The highly anticipated new Honda City was launched. And although it is a new City for the Pakistani market, it is in fact and older generation if you see the international market. This shape has already been discontinued internationally. Previous City remained in production from 2009 to 2021. New City is available with a 1200cc and 1500cc engine options. Changan Pakistan launched Changan Alsvin sedan to compete with the highly successful Toyota Yaris and Honda City. Changan Alsvin has an uphill battle to say the least. It offers more for its price tag but has the issue of being a relatively unknown brand for Pakistani buyers.

Audi Pakistan imported close to 50 units of e-tron GT despite the hefty price tag. The e-tron has been pretty popular among the top 1% of Pakistan. Audi Pakistan started taking bookings of this high end EV in the start of 2021. 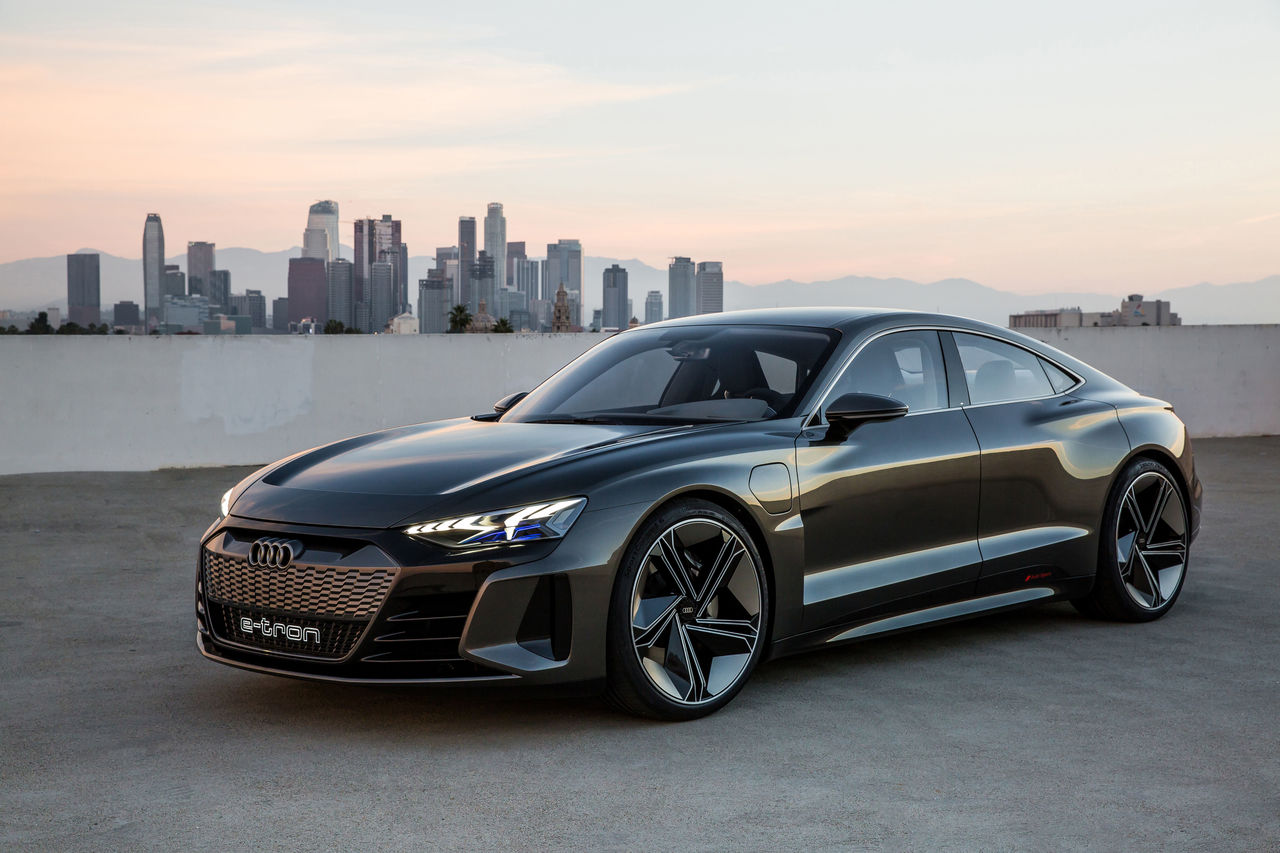 Similarly, Hyundai launched the Elantra sedan to compete with Corolla and Civic at the start of 2021 but it hasn’t been able to make the splash people were hoping it would. If fact, its bigger sibling Sonata has been much more successful than Elantra.

Hyundai Nishat launched the Camry and Accord competitor Hyundai Sonata in Pakistan, and despite people’s reservations, the Sonata has done far better than expected. The Sonata has been a surprise hit for Hyundai Pakistan.

Kia Stonic, a completely new type of vehicle for the Pakistani market, was launched by Kia Lucky Motors. The car is a subcompact crossover SUV and comes with a 1400cc engine. The Stonic has been a surprise hit and has a long delivery timeline. Its immediate competitors are Peugeot 2008 and Tiggo 4 Pro, but by launching the car eariler, Kia Pakistan has once again taken the first-mover advantage; same like it did with the launch of Kia Sportage. MG Pakistan got the greenfield status at the start of 2021 to manufacture cars in Pakistan. The HS, unveiled earlier in 2021, started selling like hot cakes soon after its launch. The company also unveiled their full electric MG ZS EV. Other than the Audi e-tron, the ZS EV is the only all-electric car in Pakistan. But considering the price of e-tron, let’s say ZS EV is maybe the only option for most Pakistani auto consumers.

Haval, the subsidiary of Chinese car manufacturer Great Wall Motors, launched 2 models in Pakistan; Haval Jolion and Haval H6 in collaboration with Sazgar Engineering. Sazgar announced the signing of a JV with GWM at the start of 2021. Sazgar is also the local partner of BAIC and announced locally assembled BAIC BJ40 Plus in 2021 which has been put up for bookings recently. Currently, BAIC BJ40 is being assembled locally whereas the Haval vehicles are being imported for now where the local assembly of both models is also a priority for Sazgar. Another news regarding Sazgar and BAIC that went rather under the radar was the manufacturing of BAIC D20 hatchback in Pakistan.

Upcoming announced and expected cars in 2022

Lucky Motor Pakistan, who are the local partners of Kia Korea, also became local partners of Peugeot France and announced their intention of launching small crossover SUVs in Pakistan. The models in question are 2008, 3008 and 5008. And right at the end of 2021, we saw a leaked video of Peugeot 2008 rolling off the assembly line of Lucky Motor’s Port Qasim assembly plant making the 2008’s launch imminent.

MG Pakistan has already unveiled the MG GT aka MG 5 saloon and it is expected to go on sale in 2022. MG 3, a small hatchback, was also teased for a launch but its year is unknown for now.

After the success of DFSK Glory 580, Regal Motors is looking forward to launching the smaller DFSK Glory 500 crossover SUV in Pakistan. The new smaller SUV is expected to be available for booking in 2022.

Al-Haj Proton also has been thinking on similar lines and will be introducing a smaller Proton X50 SUV.

Changan Master Motors announced Changan Oshan X7 Plus and their plans to assemble this car in right-hand drive configuration and later export it from Pakistan to other RHD drive markets which is a massive step for our country as a whole when it comes to manufacturing and exporting.

Pak Suzuki has discontinued its Suzuki Swift after more than a decade and will be launching the newer shape of Swift, which was internationally launched in 2016 and has already been discontinued internationally, in 2019. Kind of like Honda Pakistan launching an older gen City. Companies do it to save cost and maximise profits, one would imagine.

The fall of Suzuki sedans in Pakistan – A brief history!

New 11th gen Honda Civic was spotted wrapped in a camo decal being tested in Pakistan and is expected to be launched in the H1 of 2022. Keep in mind the top of the line RS Turbo Civic is priced more than 5 million in Pakistan so you can only guess the price tag of this new upcoming Civic.

Fuel prices played cat and mouse with Pakistanis as always. The petrol touched as high as Rs146.30 in 2021. And even though in December the price of petrol was dropped by Rs5, right on new years eve, the prices were back up by Rs4.

Other than fuel prices, another issue that has continuously caused nuisance to the new car buyers is the issue of ‘on/own’ or premium money on new cars. The premium on new cars is at an all time high and no one could do anything about it.

The import bill of Pakistan skyrocketed and the government frantically tried to control it by increasing the taxes on various imported items including cars. Pakistan cannot ban imports altogether since it is one of the requirements set by the IMF so the government decided to increase import taxes to discourage people from importing vehicles.

Premier Motors Limited announced that they will be assembling and selling Volkswagen and Skoda vehicles in Pakistan. Their assembly plant is being constructed in Balochistan.

An important development that we saw towards safety was the implementation of airbags for all new cars in Pakistan. That includes cars like Bolan, Ravi, lower level Alto and WagonR etc. Expect these cars and others in the same situation to have airbags when the legislation is passed.

Chinese company GAC along with its local partner SUPERPAK Engineering (PVT.) LTD. announced that they will be launching GS3; a subcompact crossover SUV by November 2021 but it seems the launch got delayed for some reason.

The localised assembly of CKD was the focus of some automakers including Sazgar-BAIC for their BJ40 jeep as well as Proton Pakistan for their Saga sedan and X70 SUV. MG Pakistan also started local assembly of its HS model.

There was a strike by petrol pump owners across Pakistan over the concerns of low margins on the sale of petrol. This led to Pakistanis rushing to the fuel stations causing long ques and panic buying. The strike lasted just one day.

Almost all cars saw price increases in 2021 which really didn’t sit well with the people as well as the government. The government now wants to fix and regulate car prices in Pakistan. Lately, the common practice of car makers is to put all the burden of dollar exchange rate fluctuations or taxes on the buyers and the government wants to control this behaviour of the carmakers.

M-Tag became compulsory for Motorway travellers. No m-tag, no more motorways for you.

The auto development policy 2016-2021 expired and the new policy 2021-2026 became effective. The previous auto policy has really helped rejuvenate our auto industry and brought various new auto players by giving them incentives and tax breaks. The new 2021-2026 auto policy is more focused on green energies and electric cars so let’s see how effective it is to help break the market with electric cars. The other main point of the new auto policy is the localisation of locally assembled cars and motorcycles. The government wants maximum localisation of most parts. Third point is the implementation of safety equipment in locally made cars.

The mini-budget 2021, if approved on Thursday 6th January 2022, will bring more taxes for the people. The sales tax on regular cars will go up from 12.7% to 17% whereas for hybrids from 8.5% to 12.5%. The imported electric cars expected a 12% tax increase, most between all categories; from 5% to 17%. Similarly Federal Excise Duty (FED) is also going up for all sorts of local and imported cars. Same is the case with advance tax on registration.

So these are some of the major news and updates from the year 2021. And as mentioned above, considering all the new cars that will be launching this year, we can expect 2022 to be equally exciting and eventful if not more.

Let us know what was your favourite bit of 2021 in the comments section below.